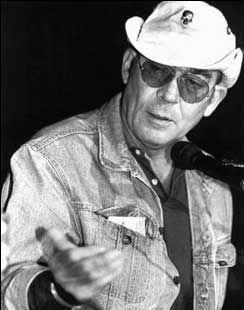 I was trying to find something in Hunter Thompson's writings that made sense of his suicide. When I first heard about his death, my thoughts drifted to Ernest Hemingway, another one of my favorite writers and like Thompson, Hemingway's words took on the role of the father figure in my life during my tumultuous early twenties. Both men were more similar than I ever imagined. They were recognized as the unique American voices of their respective generations. They pushed themselves into the middle of vigorous and dangerous lifestyles. And when they reached their 60s, living in small towns mostly everyone ever heard of, they both viciously shot themselves in the head. Either they ran out of things to write about, or more tragically likely, they accepted the fact they could no longer live up to the reputation of being the great writer that society had dubbed them.

I wondered what their answers were as I found myself digging through an old milk crate of assorted books. That specific crate held some of my favorites. I picked up and thumbed through The Great Shark Hunt, an insane book 622 pages in length covering all random ramblings from Hunter Thompson from his early days at the Kentucky Derby (one of my favorites bits of writing no one has ever read, shame on you fuckers!) to covering the McGovern presidential campaign in 1972, to bits on Watergate and Jimmy Carter. That book is full of memories and one of the rare books that has been with me for my entire 20s. It always made the cut and I never sold it, no matter how broke I was.

Over a decade ago, an ex-girlfriend, let's call her Sabine the tortured Prozac-popping artist, gave The Great Shark Hunt to me. Actually, she bought it off a used book vendor on St. Mark's Place in the East Village for $4. One Thursday night, a week or so before we started dating, she tracked me down at my after-work bar. When I was 22, I used to knock back Carlsbergs at an old man's dive on Lexington Avenue called Carlow's East. A surly Irishman named Sean, always in his white shirt and clip-on tie, worked the bar with a pissy attitude. I can recall the moment exactly. I poked fun of Sean's brogue with Tony "Knuckles" Tafullio sitting on the stool next to me. Sabine walked over and plopped The Great Shark Hunt onto the sticky Mahogany bar.

"I z-ought you would like z-is," she said her sultry French accent.

"Shit McGrupp," Tony Knuckles said as he picked up the massive book and began inspecting it, "are ya really gonna read this?"

"The only way I'm picking up that fucker is to beat my girlfriend with it. That lazy bitch. I could bust her up good and I betcha it wouldn't leave a mark."

He handed me the book and I thanked Sabine again. I've read it many times since then. I even broke up weed on it in Seattle and cut up blow on it in Brooklyn. Hunter would have been proud.

After that brief flashback, I continued flipping through my ten year old copy of The Great Shark Hunt. I randomly stopped on an article Hunter wrote for the National Observer. A freaked out moment took over. The article was on Hemingway. Coincidence? It was dated 1964 and called "What Lured Hemingway to Ketchum?" In his later years Hemingway left Cuba and settled into a small town ten miles outside of Sun Valley, Idaho. That's where he blew his head off with a shotgun in 1961. Three years later, the 27 year old Hunter Thompson would venture off to Ketchum to figure out why that place at that time for Hemingway.

Here are some chilling excerpts, written by Hunter over forty years ago:

"Anyone who considers himself a writer or even a serious reader can not help but wonder just what it was about this outback little Idaho village that struck a responsive chord in America's most famous writer. He had been coming here on and off since 1938, until finally in 1960, he bought a home just outside of town...

The answers might be instructive - not only as a key to Hemingway, but to a question often pondered, even in print. 'We do not have great writers,' he explains to the Austrian in Green Hills of Africa. 'Something happens to our good writers at a certain age... You see we make our writers into something very strange... We destroy them in many ways.' But Hemingway himself never seemed to discover in what way he was being 'destroyed', and so he never understood how to avoid it.

Even so, he knew something had gone wrong with both himself and his writing, and after a few days in Ketchum you get a felling that he came there for exactly that reason...

Standing on a corner in Ketchum it is easy to see the connection Hemingway must have made between this place and those he had known to be his good years. Aside from the brute beauty of the mountains, he must have recognized an atavistic distinctness in the people that piqued his sense of dramatic possibilities...

From such a vantage point a man tends to feel it is not so difficult, after all, to see the world clear and as a whole. Like many another writer, Hemingway did his best work when he felt he was standing on something solid - like an Idaho mountainside, or a sense of conviction.

Perhaps he found what he came here for, but the odds are huge that he didn't. He was an old, sick, and very troubled man, and the illusion of peace and contentment was not enough for him - not even when his friends came up from Cuba wand played bullfight with him in the Tram. So finally, and for what he must have thought the best of reasons, he ended it with a shotgun." (National Observer, 25 May 1964)

A short time after, with Hunter's words inspiring me to walk out of my job on Wall Street and go home to write a novel, I adopted some of his words as my own personal mantra, "Don't take any guff from these fuckin' swine." A decade later, I would use that quote as an introduction to my third novel.

I've been compared to Hunter so many times that it's really an insult to him. He's a real writer and I'm a hack. I'm much more a fuck up than an adventurer. So who cares if we're both drug addicted writers with wacky sidekicks? Shit, everyone's an addict in one form or another and most of them have vanity sites with blogspot addresses which ironically qualifies them as a writer. And for every wild, reckless story I have to brag about, I have a half a dozen more incidents where I got lucky and escaped imprisonment, a hospital stay, and/or deportation. So I have a knack for stringing together words and can hold my mud a lot better than most idiots who try to run with the bulls in Las Vegas and piss in the tall weeds with the big dogs, but that doesn't make me any better of a true visionary that Hunter Thompson ended up becoming.

Hunter showed me that speaking from within and bouncing past the structured limits of conventional writing is the way to embrace yourself. Trying to write in the style that my educators scared me into thinking was the proper way held me back from achieving my true potential as a writer. Embracing Hunter's style of freedom of expression was a key to my early stages of developing my craft. I figured out the best way to write a story is to throw yourself into the middle of the story and experience it for yourself like Hunter did in so many instances. That is why I felt and still feel that a lot of my everyday decisions in life and the choices I make influence my future as a writer.

I realized that to become a better writer, I had to live life instead of watching it happen from the sidelines. "Write what you know," is the old saying to first time writers and if you don't know shit, then your writing is going to be shit. I knew I needed to take a few risks, so I did that. I pushed myself to the edges of insanity. And was not afraid to seek out the weirdness in the world. Hunter inspired me to do just that.

Of course my dream job is similar to Hunter's all-expenses-paid gig with Rolling Stone magazine... to travel the world and cover random events (like the Tour de France or the Oscars or the National Rodeo Finals) for a hipster magazine with an unlimited room service tab and a suitcase full of illegal narcotics, opiates, and herbal supplements, only to get so wasted that I'd turn in the article two weeks late, nowhere resembling the topic my editor had assigned. That would be pretty cool if I got to do that someday.

I wish I could say something more and have a better entry to pay homage to my favorite writer. But I'm exhausted from a wild trip to Miami and my mind is frazzled because I'm still undecided about the direction of my writing. Plus I'm very sad to hear about Hunter's suicide. I some way I am happy that he doesn't have to live with that pain that old writers get. And in some way I am sacred shitless because just in case I do end up living for a few more decades, I'm going to have to face that same moment that Hunter and Hemingway had to. Right now that's the last thing I want to think about. I need a few more days to allow all of this to sink in.

Poker and blogging were two things I was so passionate about a few weeks ago, but right now they are both unimportant to me. I'm going to take a few days away from the tables, take a break from blogging and from sharing my words with everyone else. I need to write for myself and only for myself right now.