"By the way Pauly, that was a sympathy fold." - Julie after she mucked her cards

The bunch of us from NYC got together and played in the first blogger event at the Blue Parrot. We had some cancellations at the last minute. Joaquin had a gutshot wedding to attend to and F Train had to leave the city for a few days due to a personal family matter. If you get a chance, stop by his blog and give him your best wishes. 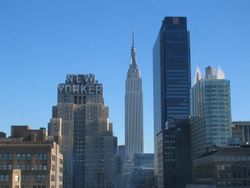 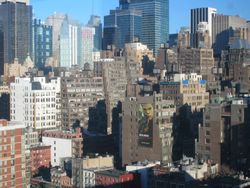 A view of Manhattan from the Blue Parrot (19 stories up)

The replacements included Julie (3rd place winner in the Holiday Classic in Vegas) and Toni from the TowneHouse. Monte Christo was a no show... what happened? We missed ya, Buddy! Ugarte made his first appearance since his self-imposed exile. Have I mentioned how much fun it is to be caught in the crossfire of discursive banter on random legal topics? The Vicodin helps ease the pain.

It was a poor showing on my part. I was bluffed out of a big pot by Julie. And later on, I was the first one knocked out... by my brother of all people. Expect this write up to be short and sweet. I didn't last very long. Make sure you check out the other bloggers (Derek, Mas, and Toby, and Ugarte) for their reports.

Level 1: Ugarte was tardy, even though we started almost 12 minutes late. We chipped him down until he arrived. The first few hands are always very tight. Derek raised. Toby called and with an ace on the board he bet out. She folded and he showed his pocket Hellmuths! (Editor's Note: That was for F Train!) Ugarte eventually arrived. We had nine players, five bloggers, four lawyers, a comedian, and Ferrari's two cats roaming around.

A couple of hands later, AJs arrived. I like AJs a little more than AJo. I once said that... AJo is like your shopoholic ex-girlfriend. At some point she's going to bleed you dry. Well AJs is like her bi-polar alcoholic twin sister. She looks just as hot but she's one cocktail away from unleashing her inner Tara Ried. So I got AJs. The flop is Jxx with two clubs. Toby bet and I moved all in. Over bet? Absolutely. I just wanted to be the first one to go all in. T1540 and playing a tight game.

Level 2: Blinds 20/40. I found myself heads up with Julie who was the big blind. I had AJo on the button. Of course. I raised to $200. Coach folded and Julie called. The flop: Qc-Jc-8x. I don't have any clubs. Julie checked and I bet $500. Julie thought about it and called. I put her on a flush draw. The turn: 6c. She checked. I made a mistake. I checked. I should have bet to see if she had the flush and if she didn't, I could have taken the pot down right there. The river was a rag. She bet $600. I folded. How could I call with SPTK with a possible flush and a straight on the board? Julie showed her cards. A-10o. No clubs. She flopped a double gutshot draw and missed. I was outplayed and had less than T800.

I was shortstacked and went after a few pots in late position when everyone checked to me on the flop. One time I had middle pair with a flush draw and raised Julie. She thought about calling and threw her cards into the muck.

"That was a sympathy fold."

Might have been the funniest thing I heard from that side of the table.

Level 3: Blinds 30/60. Derek raised in EP making it $200. Coach had just counted out my stack the hand before. I had T950. I pushed all in with AQs. His raise smelled like AK but I hoped he had pocket 9s or 10s. I wanted to take my chances with a coin flip if he had the pair. He took a while and eventually decided to call. As he showed AKo he said "Looks like a race." He put me on a middle pair. I was toast. I flopped an ace. With two jacks on the board by the river, our kickers played. Knocked out first. No much fun, eh?

"I'm going to play a side game with myself," I muttered as I left the table. I eventually snuck out and went downstairs for a couple of six packs of beer. I opted for Miller High Life and Mas was very pleased with my choice. 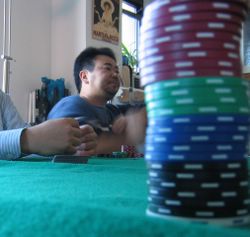 The Genius of the Poker...

Level 4: Blinds 50/100: Toby was knocked out by Derek. She wasn't getting any cards and pushed with a short stack. Her A2 lost to Derek's 66. He was the overall chipleader with 7 players left. Ferrari was next to go. His AK lost to Julie's KJo. She had him covered and he was bounced in 7th.

Level 5: Blinds 75/150. Mas has been playing pretty tight all afternoon. He was looking for a coinflip situation with 88. Julie called with AQo and knocked out Mas. She was the new chipleader. Mas joined us in the Losers Lounge and we played $2-4 holdem.

Level 6: Blinds 100/200. Toni was the shortstack and moved all in with pocket tens. Julie called her with K6 and flopped two pair! On the river a fourth heart fell and Toni had the 10 of hearts and doubled up with a flush.

Level 7: Blinds 150/300. Ugarte's AJo walked into Julie's AA who limped in and then called Ugarte's raise. On a ragged flop, he moved all in. She quickly called with pocket aces and was back to being the chipleader. They held up and Ugarte joined us in the Loser's Lounge. It was now four way action. 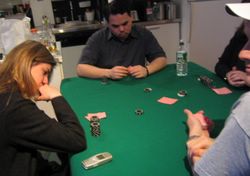 Level 8: Blinds 200/400. Derek attempted a steal with 94s. Julie called with AK. He was about to join us in the Loser's Lounge until he flopped two pair. His trip 9s won and doubled up against the chipleader. A few hands later, he got a visit from the Hilton Sisters. Coach moved all in with JTs. Derek called and Coach flopped trips 10s to double up.

Level 10: Blinds 400/800. Severely shortstacked Julie had 57o and moved all in against Coach's 55. She flopped a 7 and doubled up. Those guys played four handed forever it seemed. The bubble play went back and forth, while Toni silently built her stack and eventually knocked out Coach on the bubble.

In the meantime in the Loser's Lounge, Mas called Ferrari's preflop raise with The Hammer! He flopped two pair and hit his boat on the turn. Good work. 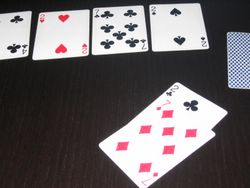 Late Levels: Derek had to move all in with KT. He collected his third place prize when Julie called with AA. It was heads up between the two replacement players... Julie and Toni.

The tourney lasted for almost 3 and a half hours! They played four handed for almost an hour. In the cash games, I got may ass kicked and felt like Marvis Frazier back in 1986 when he got whooped by Mike Tyson. I dropped $80 in less than an hour. It was ugly I won only one hand and had all my middle pairs cracked. 88 twice, 10-10 twice and even 77 once. Toby didn't do too well either. Only Ferrari and Ugarte cleaned up in the side games. 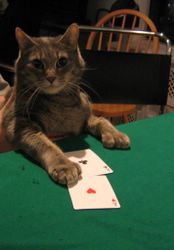 I took a harsh beating all day. From the minute I woke up and played an SNG on Party Poker, I was not playing well. Even Ferrari's cat was creaming me. Thanks again to Ferrari for hosting and for everyone who attended. We are thinking about having another one in March or April. Stay tuned. Congrats to Julie, Toni, and Derek for making the money. Derek was the blogger who lasted the longest. Good job. Go check out his write up.... here.
by Pauly at 2/06/2005 02:46:00 AM