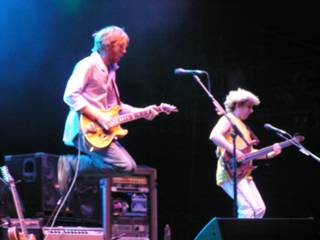 Trey and Mike during Y.E.M. at IT.

Phish was nominated for two Jammy awards for Tour of the Year (Summer 2004) and DVD of the Year (PHISH IT). Mike Gordon received a nod for Best Download of the Year (12/31/04 with Benevento/Russo Duo in NYC).

Chong's Marijuana-logues = Up in Smoke. Here's a bit:

"The Marijuana-Logues" has canceled its spring tour after its star, Tommy Chong, was barred from performing in it because audience members were frequently lighting up during the show.

And this made me chuckle: Man can sue over stolen sperm. Here's a spurt:

An appeals court said a man can press a claim for emotional distress after learning a former lover had used his sperm to have a baby. But he can't claim theft, the ruling said, because the sperm were hers to keep... Phillips accuses Dr. Sharon Irons of a "calculated, profound personal betrayal" after their affair six years ago, saying she secretly kept semen after they had oral sex, then used it to get pregnant.

And my Sunday's are not complete without a Thomas Friedman op-ed piece. Here are four from Freidman: