- Albert CamusAbout a year ago I almost hit rock bottom. I live to write and one September day in 2003, I woke up completely uninspired. That was not a nimble mischance. My once vast pool of inspiration had dried up. You could imagine the treacherous confusion that set in as I wandered around unhinged, unbalanced, and under-excited-about-life, surfing the tumultuous waves of postmodern society for several weeks while my mindset was tepid, at best. I was anonymously slumped at the end of a bar, muddied in a mid-afternoon buzz, when out of nowhere, I got up from my stool and walked out into the crowded street. I decided at that point to stop contemplating the big questions and start living. I'd push myself to write, to live, to travel, to explore, and most importantly... to make mistakes. Lots of them. I found something that day. Something I had been missing for several years. I discovered the intangible fearless attitude that I used to give me a glittering swagger when I walked so many years before. Within eight weeks, I penned two new novels, one of which I can proudly say, was my best piece of writing I every created. Coincidence? As soon as I shrugged off the possibility of failure, I found the energy and inspiration to start more projects. Some of them have panned ut, others fizzled out. But if I didn't take the first steps, I never would have figured out what parts of my vision could become reality.

A year later, I find myself overwhelmed with projects. Instead of pulling myself out of a deep depressive funk where I felt I had nothing pushing me... I find myself, today, slipping into a deep depressive funk because I realize that life is so short and because of that... I won't be able to have the time to do every project that has crossed my mind. Sadness smothers me when I think about all those poems, short stories, screenplays, stage plays, and novels that I'll never have the time to write. Or how about those magazines, paintings, photographs, films, and sculptures I'd like to create? I had so much time... and I wasted it all, mostly, caught up in a haze of conformity. If I just slipped away from the restraints of conventional thinking years earlier, who knows what I could have accomplished by now.

Alas, I am where I am and how I got here has very little importance anymore. It's how I live my future days that counts the most. I'll make myself the same promise; to live, to write, to explore, to travel, and to make mistakes. This upcoming year I shall still be a student of life. I'm a decade away from being a master of both literature and poker. If I study each subject with tenacious focus, I'll reap the benefits of my dilligent efforts in the next decade. For now, my energies will be focused on strengthening my liabilties, while capitalizing on my assets, and plodding forth on a path of creativity and personal enlightenment.

Top 5 Highlights of The Last Year..
1. Meeting Jodd
2. Going to Las Vegas twice with my brother
3. Reconnecting with Jerry in Miami
4. Seeing 24 out of the last 26 Phish shows
5. When Wil Wheaton read, then linked up the Tao of Poker to his blog

By no means is this list in any specific order. They're all equally amazing moments I've had. I wish I could list them all. But these stand out as some of the points in my life when I felt truly lucky to be alive.

My readers from all over the world, and all my fellow bloggers, and the numerous creative people in my life... all inspire me. Words like, "Thanks" can never do enough justice. One year later, I realize how blind I used to be, because all the inspiration I'll ever need had been surrounding me all along. 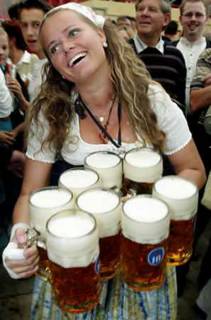 By the way, nothing turns me on more than big-breasted German girls with an octuplet of beers. But then again, I'd be just as happy if Katie Holmes showed up with a five-pack pack of Pabst Blue Ribbon.

I had a dream last night. It was simply spectacular. I frantically scribbled down my thoughts. Here's what I wrote:

In a mere gracious utterance, wholesome flowers wilt in the shadow of my wretchedness, for I am their executioner sending them to their inncoent deaths, tearing their souls in half to expose their barren existance. Memories of sunshine filled days can only be conjured up on idle afternoons as my rebellious prosperity privately sluaghtered my friends, signifying the end of a spree of heinous and grievous crimes. I can no longer comfortably sit on the grassy carpet owned by the pink-clad, malcontent heiress, constantly summering at the sea-walled estate on one of the royal islands, the largest one in the chain of Paradise, which is always overcast with envious clouds.