"A fashion is nothing but an induced epidemic."

- George Bernard ShawTonight I play in the Aussie Million satellite on Party Poker. That should be one of the biggest events I ever played in online. I'm itching to go to Australia, which will happen if I come in first place. I was supposed to play on Wednesday, but due to techical problems, the tournament was cancelled.

I bet heavily on the Bloody Yanks in this weekend's Ryder Cup golf matches. Yesterday, I was watched Dan Harrington's cousin play against Tiger Woods and Phil Mickleson (in between flipping back and forth between CNBC and Dawson's Creek). Of course it's always an event when the Yankees go heads up with the Red Sox. This weekend's series will have an October-post-season flavor to the the greatest rivalry in baseball. There's a lot of tough college games this weekend. Auburn-LSU could be a thriller. Week 2 of the NFL has a few trap games... like that Atlanta-Rams game. The local bookies (Vinny and the infamous Cologne Brothers) are putting the Hotlanta at a 3 point favorite. My brother smelled a trap right away. I'm tempted but I won't go there. Instead let's double up on my Jets! They never play well on the road in California, but after last week's glimpse of a rejuvenated Curtis Martin, I can't help but think he's going to run all over them and show LDT that he's still the dude. I'm 1-0 in my fantasy football league ($2200 to the winner) and Uncle Jodd's Band is 4th in points overall. Last year we only won two games so we're excited about our victory in week one.

Next weekend has the potential to be one of those epic adventures where at least someone goes to a hospital or jail... or both. Al Can't Hang has his yearly monster party. He's be telling me about it since May. I had my calendar marked since then. OK, that's not entirely truthful. I don't own a wall calendar. But, I've been carrying around a piece of paper in my pocket that says, "Al Can't Hang Party 9.25 Philly."

So far, we have confirmations from several poker bloggers: Iggy, Boy Genius, and Carter from Cubanlinks.org. I heard that Sean might be dropping by... as well as the Grubmiester.

Before BG and Iggy committed, I already made plans to hit the Borgata in Atlantic City with Al and Mrs. Hang. Now, Iggy can bankroll me into the $30-60 game. Just kidding. We'll be combining bankrolls and staking Mrs. Cant Hang.

My brother can't make it for the festivities. He's got a friend in from outta town and he has to show him the city. He's bummed out. The only poker bloggers he got to meet were Felicia and Glenn.

How many poker bloggers have I met? Well, I met Felicia and Glenn in Vegas in April. I met Ugarte (and through him Signor Ferrari and Rick Blaine from Rick's Cafe and Asphnxma from Riding the F Train.) I met Daddy from Snail Trax at one of the Phish shows in Indiana. On my way back from Phish tour, I stopped by Boy Genius' home game and met Lord Geznikor and one of the brother's of BG. Hopefully I'll meet Monte Christo soon. I had a chance to meet up with Poker Chronicles and Double As on Thursday, but never had the time to go down to Atlantic City. Speaking of which, I'm still waiting to hear how Riding the F Train fared yesterday. He played in the $1500 NL event at the Borgata.

I recently commented on Maudie's site that I think she might be my illegitimate mother. Here's how she responded:

Pauly I can't think of a better illegitimate child to have than you... I'm sure my girls would allow an addition to the menagerie as long as you follow Maudie's rules:

- Smoking (all kinds) outside.
- Take out the trash.
- Do your homework.

And at least introduce me to the sluts ...er... girlfriends. 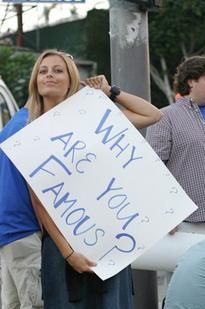 One of the protestors outside one of Paris' book signings.

Paris Hilton has a new book out and a group of people known as H.O.P.E. were protesting everyone's favorite hotel heiress. Here's their mission statement:

We at H.O.P.E. have a simple stated mission: to bring quality to the world of entertainment while working outside of the traditional network, record label, and studio structure. It is our "hope" that by voicing our feelings and concerns to the powers that be a better tomorrow, and not The Day After Tomorrow, is only around the corner for the good people of the United States of America, the world, and beyond.

Yeah these folks are hardcore. They're slogan was: "Read a book. Don't write one!" Here's a little inside information... Paris Hilton never picked up a pen or typed a single keystroke in the construction of her book.

I almost pissed in my pants when I read this blurb called Tests Shows Rick James Died of a Heart Attack. Here's a bit:

The coroner's office also listed focal pneumonia and "effects of multiple drugs" as other conditions contributing to the cause of death.

"Toxicology revealed the presence of the following drugs: Alprazolam (Xanax), Diazepam (Valium), Bupropion (Wellbutrin), Citalopram (Celexa), Hydrocodone (Vicodin), Digoxin, Chlorpheniramine, methamphetamine, and cocaine," the statement said. "None of the drugs of drug combinations were found to be at levels that were life threatening in and of themselves."