I've never been to Estonia before. I've never played speed poker before either, so I cancelled my trip to the Hamptons for the weekend to play in the World Speed Poker Championships Satellite on Party Poker, this Saturday at 6:15 pm EST.

I won a $9 + $1 qualifier this morning. I outlasted thirty other players and won a seat to the upcoming $200 + $15 satellite. The winner of that will get an all-expense-paid package for the World Speed Poker Championships to be held in Tallinn, Estonia in mid September. For every 25 entries in Saturday's satellite, Party Poker will be giving away a seat. The last few of these satellites had about 40-50 players. Party Poker gave away one seat and paid out cash to places two through four.

When I told my brother that I won a seat in the satellite, he said, "You'll enjoy Estonia. It's beautiful this time of year." 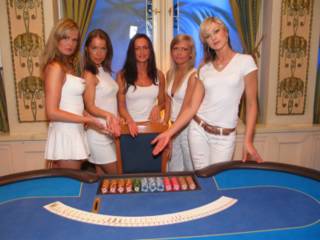 This is the third time I won a Qualifier to a satellite. Last April I won two qualifers for the WPT Championships at the Bellagio... and grinded my way to 12th in one of the satellites, missing my shot at a WPT seat by nine places.

You'll know where I'll be on Saturday at 6:15. I'm gunning for a trip to a country I would never have dreamed about visiting. These satellites are always a crap shoot. But, I am looking forward to the opportunity for solid competition against some decent players.

Here's the tournament's website: World Speed Poker Championships. It explains what the hell speed poker is all about. Here's a bit:

In a nutshell - it's a poker tournament where the clock never ever stops running. The dealer deals and starts the 15 second player clock when the action is on you No time to think about all the possibilities or your hand is declared dead when the 15 second bell rings!!!

If that doesn't scare you - how about this? They have 2 dealers for every table - one to shuffle and one to deal. Hand rate is expected to hit 50 hands an hour, and it gets better!!!!

Did we mention what the "player countdown clocks" look like? Well you are going to love the look!!! 15 of the sexiest looking young girls in Estonia have been signed up to stand behind the players and hold the time clock. If that is not enough to put you off your game we don’t know what is.

For the satellite on Party Poker, it's just like a regular NL tourney... no shot clock, or a scantly clad Estonia beauty taping me on the shoulder shouting, "Faster, Dr. Pauly! Faster!"

I wonder if this is all a set up by the Estonian mafia? When we get there, they are going to drug us, then rob us of our kidneys and other vital organs for sale on the Russian black market.