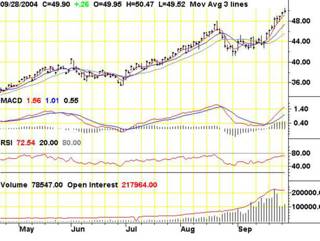 Just as I predicted nine months ago... Crude Oil Futures would hit highs near the election. Instability in Nigeria has Wall Street and OPEC worried. Rebels are promising a war will begin on October 1st. They warned oil companies to shut production in the Niger Delta before they declare an all-out-war on Friday. That news drove oil prices up the last two days, hitting a high of over $50 this morning. Nigeria is the fifth largest supplier of our domestic oil consumption. Global oil production is pumping out at just about full capacity to feed the enormous demand of China's economic expansion and boom, which is reaching it's fastest output growth in 24 years. There are also serious security threats involving Suadi Arbaia, Iraq, and Russia which has magnified the price surge. Opec promised to increase their production to help combat lower prices, alas some experts don't think Opec can do anything to stop the price surge.
by Pauly at 9/28/2004 04:40:00 PM