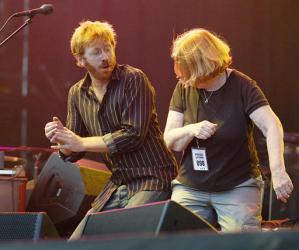 Trey and his Mom do the Sexy Bump!

My 5 Favorite Trey Moments...
1. Seeing Trey get pegged in the head with a glowstick at the end of the third set for the Halloween Las Vegas show in 1998.

3. "How much for the grenande?" ...the scene from Bittersweet Motel when he haggles over a gun purchase with an arms dealer in a store in Spain.

4. During one of the Miami shows after they jammed out a kick ass Foam he turned around to Fish and said, "Wow! That was fun!!" I had second row seats side of the stage with Zobo that night and I could see him chatting with Page and Fish and Mike in between songs.