The Day Before, More Vegas Tips, and Moose Cup 2005

On Monday I played Joanne heads up on Poker Stars for the North American Moose Cup. The final score: Pauly 3, Canada 1. She posted about the bad beat that I put on her in game 1. She slowplayed AA on me for her victory in game 3. For now, the Moose Cup is mine.

Derek and I leave for Vegas tomorrow. I'm ready. Later today I'm gonna get a new cell phone and tonight I'll pack. I have one more article to write before I hit the road. And once, I'm off... I'll be in "Vegas mode."

I do not want to disappoint anyone who is meeting me for the first time, but I want to warn you that I am not as wild and crazy as every thinks I am. For the record, I will not be showing up in Vegas with two nymphomaniac teenage gymnasts (from a Eastern European county that no longer exists), along with an eight-ball of Colombian Snow Flake and a brick of Moroccan hash the size of Herve Villechaize. Believe me, if I had access to those kind of drugs and were able to woo nimble nymphets like that, the last thing I'd be doing would be hanging out in Vegas with a bunch of degenerates gamblers.

OK, I got a positive response from my Tips on Surviving Las Vegas. I'd like to add a few more to the existing list: 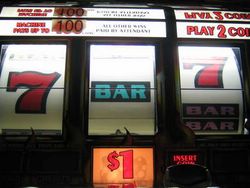 11. Food is fuel... If you have the opportunity to eat, do it because you never know when you might never have another chance to get some grub. Last December, I never saw Iggy eat one bite during our last trip. He was on the ciggies and Guinness gambler's diet.

12. Wear comfortable shoes... As a native New Yorker, I walk everywhere and I'm used to trudging along for five or six miles in a day. If you are a lazy fuck who's a slave to their vehicle, then start walking a mile or two everyday to get yor legs in shape. The entrance from the Rio to the actual place where the WSoP is being held is a hike. Plus if you want to walk the Strip, everything appears much closer in the desert.

13. Bring a watch... There are exactly six clocks in the entire city of Las Vegas and you won't see any of them in an actual casino.

14. Keep your gambling bankroll separate from your other cash.

15. $50 bills are bad luck... Don't feel weird about asking to change in your $50 bills. That is one superstition I've been following every since Grubby clued me in.

16. Avoid the slots... Grubby will try to turn you over to the dark side of gambling and get you to hit the slots with him at 3am. Resist the temptation!

17. Don't tell people at your table that you have a poker blog... Please for the love of God, do not tell anyone you're in town for a poker bloggers convention. Keep that shit on the down low. You're in Vegas. It's a surreal place. Make shit up. Pretend you're a fish. I lie to dealers, strippers, cab drivers, and my tablemates all the time when I'm in Vegas.

During my last three trips, I've told random strangers that I was a marine biologist, an aquarium salesman, a trumpet player in a Latin jazz band, a radiologist, and my favorite... that I've just got out of prison. The ladies seem to like that one. Bottom line is this: if you can't successfully lie to the people at your table and if you are unable to convince them that you are in fact an astronaut, then you shouldn't be playing poker in Las Vegas. Go home and fire up Poker Stars instead.

During this trip I intend on telling folks that I'm either a mountain climber (please don't laugh when I start talking about Mount Everest to anyone at my table) and I'm thinking about being the malcontent heir to the "Spork" fortune. A spork is not a fork, but not quite a spoon. One of my fraternity brothers in college used that line to try to pick up girls in bars. He even convinced a few that he had a spork shaped swimming pool. And if I happen to stumble into a strip bar, my cover story will be that I'm the tour manager for a metal band called The Al Cant Hang Experience.

Anyway those are my latest additions to my Vegas tips.

Here are Pauly's Original Top 10 Tips on Surviving Vegas:
1. Cut back on sleep immediately.
2. Sip, don't chug.
3. Water is your friend.
4. Bring a cell phone charger.
5. Take pictures.
6. Ask before you post pictures on the internet.
7. Speak your mind and stay in the moment.
8. Table image is a factor in real life.
9. Don't be Gigli.
10. Never underestimate the importance of a $20 tip.

By the way, if we casted Poker Bloggers in Vegas: The Movie, who would play you? For me it's either Benicio del Toro or John Cusak.

If I had to cast for BG, I'd pick Philip Seymour Hoffman. I know he's going to be wicked pissed about that. But I think Philip Seymour Hoffman is the best actor of our generation. I'd snag Owen Wilson to play Otis and William H. Macy to be Chris Halverson. Rob Lowe would be the perfect G Rob and how could you not cast Vin Diesel to play Bad Blood? If Felicia gets her life story made, Hillary Swank should get to play her. If Tara Reid could pull off an Canadian accent, she could be just right as Joanne. Rounding out the rest of the freaks would be Ted Nugent as Al Cant Hang and The Poker Geek will be played by Wil Wheaton in a cameo. Without a doubt, Chris Rock was born to be Grubby.