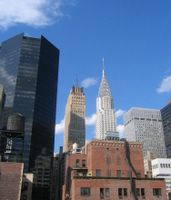 Toni hosted a Saturday afternoon BBQ followed by a tournament and cash games. She dubbed it "Pauly's Bon Voyage Bash." Damn, talk about one cool lady! Toni knows how to throw a good party. Have lots of great food, good music, interesting people, and include a $50 freezeout at some point during the twelve hour blow out. Yeah, I wandered out of the TowneHouse close to 5am after arriving 12+ hours earlier.

Although Toni's midtown apartment lies in the shadows of the Chrysler Building, she manages to have a large terrace (sadly, it's bigger than my old studio) and that's the perfect place to enjoy an almost-Summer afternoon party.

The BBQ started out as a mini-NYC poker bloggers convention. I met Joaquin and Jordan from High on Poker, both for the first time. F Train and Mas stopped by and played in the tournament. Derek and Ugarte showed up later for one of the many cash games going on all night. Toni had a few friends, TowneHouse regulars, and co-workers over so it was a good mix. Poker was the center of the events during the afternoon, evening, and early morning hours.

The highlight of the party was seeing everyone at the TowneHouse for the last time before I head off to Vegas, in less than nine freakin' days. The other highlight was chopping first place with F Train in the tournament after playing a back and forth heads up match, which last over a half hour. To hell with Jesus and Phil, NBC should have been taping F Train and me battling wits at the TowneHouse! We we're much funnier and no fuckin' commercials. 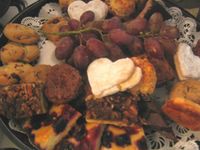 Toni had some great food in addition to the usual BBQ fare. The deserts were amazing, including the cookies and brownies. Kathy made chocolate covered strawberries which kept me sane all night long.

Toni also ordered a crock of chili! Impressive. I'm a big chili guy. I swear that Joaquin ate at least four bowls. And it goes without saying that in a room full of lawyers, the alcohol was flowing pretty heavily. I'm pretty sure everyone was hammered at one point or another. I know I was steadily fucked up since the moment I walked in the door until the moment I left.

I ended up heads up at the final table with F Train. I was behind about 3 to 1 in chips. He had a big lead. I offered him to "chop" or split the first and second place prize money ($300 for 1st and $150 for 2nd). He laughed when I made that suggestion. I did a little trash talking and told him I'd have to take all his chips!

We played heads up for about a half hour. I came from behind to tie, then I took the lead, which I blew, and then we were even again when F Train decided that it would be a good time to chop. We both walked away with $225. Not too bad. 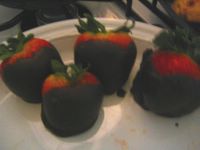 I wish I could say more about the first cash game other than that I lost $85! My Hiltons were cracked and that cost me a few bucks. As always, I'm a bleeder in Omaha hi/lo and I was giving away my chips. I was about halfway between Tara Reid drunk and Courtney Love shitfaced at that point and at a table of six, I declared that TPTK is an awesome hand in Omaha. That's why I pissed away most of tournament winnings, with delusional notions such as my Omaha debacle.

Otis called me sometime around 8:27pm EST for a Dial-a-Shot. I think he said he was in a bar in Boston. Or maybe I'm making that up. The last few times I've spoken to Otis, I've been obliterated, including in Vegas. When I was in Kentucky with Daddy a two weekends ago investigating the case of the Drunken Donkey Fuckers, we almost called Otis. I waited until Iggy's home game to give him a shout out at a more suitable hour. Anyway, thanks for the call, dude.

At that point, I was too sloshed to be using electronic equipment and hid my cell phone and camera. I really didn't care how much I lost and from my lack of notetaking, I'm sure that I was completely in the moment and enjoying playing cards with everyone, especially Mas, who I never get to see anymore now that he's a married man! Congrats again, Mas. And I never see Ugarte anymore either. He's becoming this bigshot comedian and only hangs out with people who sip Pinot, use air quotes, and toss around hipster buzzwords like Mocha Latte and WiFi as if they were the names of their firstborn children. Mas and Ugarte left the game up a few bucks. 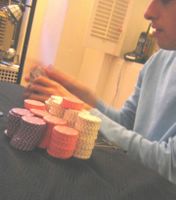 We ended the game just before 5am. I ended up down $64 for the second cash game and walked away up $26 overall I think. Ah, I dropped about $150 in the two cash games after the tournament. As least I was freerolling in the cash games.

Well, it was a perfect sendoff from Toni and her friends at the TowneHouse. Seriously, the chili rocked and Kathy's chocolate strawberries were awesome. We hung out for over twelve hours and drank and played poker the entire time. I got to meet a few people and two bloggers that I read (Joaquin and Jordan) but never met. Glad I got to do that before I headed off to Vegas. That was Derek's first time at the TowneHouse and I know he had a good time playing with everyone as well.

Shit, and I got to play heads up with F Train for over a half hour. I think that would have been more entertaining than some of the average coverage of the NBC Heads Up Championship. F Train acted like a real professional when I bad beated him and didn't fall out of his chair like Hellmuth did in his childish display of theatrics. Man, I should have had our heads up battle videotaped and uploaded it for everyone to see. Next time, I promise.

The only sour point was when Toni's upstairs neighbor complained at 11:06pm on a Saturday night saying that there was too much noise. I had been there on a random Thursday at 3am and we've been much louder. I dunno what was up that clown's ass, but it was comical to see a bunch of drunkards try to hush each other everytime the conversation got pretty loud.

Anyway, it was cool that Toni hosted a Bon Voyage Party. It feels good that people from back home will be checking in to see what I'm writing. Yeah I'm already looking forward to returning to the TowneHouse at the end of the summer to play with Toni and her friends again. Thanks again, Toni.
by Pauly at 5/23/2005 12:04:00 PM