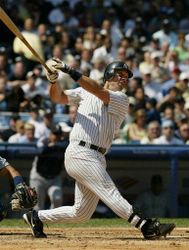 Just when you thought the Yankees were toast, they won five straight. The one thing in common in all of those wins? Five straight homers by Tino Martinez. Man. The Yankees gave up five runs in the first inning and stormed back with five of their own in a rare weekday day game. Ah, they still blow. Carl Pavano got rocked and they beat up on a team that dropped 10 out of their last 11. Then again, you are supposed to sweep teams like that.
by Pauly at 5/11/2005 07:10:00 PM