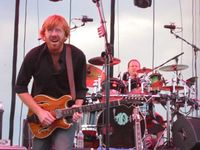 If you don't know, I've been working on a Phish blog for a while now. At first Coventry was a place where I posted my friends stories, personal dramas, and pictures about the insanity of the last shows ever with Phish in Vermont. Yeah, we all walked to the last shows and had to deal with some thing awful... rain, mud, and both.

Sometime last year, I decided to post Phishy related news whenever something came up. Eventualy it evolved into a blog with the basic theme is all things Phish. I changed the named to Coventry: A Phish Blog and now t's the #1 search item in Google for phish blog. Pretty cool, eh? Maybe some of that traffic will spill over here. We've been getting alot of hits ever since Trey went back on tour. I've been posting Trey setlists along with random Zooma tour info. I also added a new Widespread Panic reviews. Since I'm going to see Trey this weekend and two shows next weekend, I'll have a chance to add some reviews and pictures.

Anyway in the future, I will devote that blog space to concert reviews, music news, and all things Phish. At some point, I'll write up random tales that I experienced while on tour with Phish. I hope to post some Japan stories too and maybe even get a guest post from Senor! It's a group blog and Molly posted something recently. Take a peek.

Here's a nice segue... the Tao of Pauly Pothead of the Week goes to: Man Attempts to Buy Pizza with Pot. Only in Fargo, ya? Here's a bit:

Pizza Patrol driver Atif Yasin thought the man was asleep when he arrived to deliver a medium pizza and 20-ounce soda. After knocking a few times and calling the man on his cell phone, Yasin said he answered the door in his boxers.

The man took the pizza, spent a few minutes looking for money and then offered to pay with marijuana... when he told the man that he either needed money or the pizza, the man began to yell and pushed him and punched him in the face.

After calling police and waiting for officers to arrive, Yasin delivered two more orders that were waiting in his car.

For my four readers who are horse racing fans, At the Derby, Racing Is Facing Its Drug Problem is an interesting read from the NY Times. This weekend, I like Wilko to win the derby.

Paris Inc. speaks for itself. And a sample:

After years of being a ubiquitous presence on the global nightlife scene, dancing on tabletops and sauntering down red carpets from Australia to Los Angeles, Paris Hilton says she is eager to leave her Red Bull-fueled evenings behind and make the leap from globe-trotting sex kitten to savvy business titan.

So many things wrong with that article. I'll let you pick it apart. Paris Hilton is like a a bad jingle to a commercial that you can't stop humming or singing and can't get it out of yur head! Torture.

Moving on to hamburger lovers like myself... I might check this place out with Derek and Al Cant Hang. 15 pound burger? Are you shitting me? In Atlanta I used to eat at Fuddrucker's sometimes. We'd always give fake names. Skippy used to use Octavio. I used Horatio. The 1/3 pounders with bacon kicked my ass. In NYC there was a small deli across the street from the World Trade Center where I used to eat there every day when I worked there the summer before college. I used to be a huge fan of their cheeseburgers. Nothing too big, but juicy. McAnn's is a chain of Irish pubs and their burgers were pretty kick ass as well. Fat, thick, on toasted buns with crunchy steak fries. And then there's this Greek diner in the neighborhood I grew up in... those burgers are the some of the best I ever had. In Vegas, I took Senor to his first Fatbuger. They ain't bad.

An American died on "The Mountain." At least he reched the peak before he died on the way down. I'm shocked that more people don't die up there on Mt. Everest every year.

I never thought I'd ever link Wonkette up, but here I am. JLo Contemplates White House Run. She'll be lucky if she can afford to buy a White Castle franchise in ten years let alone a run for the White House.
by Pauly at 5/04/2005 12:25:00 AM