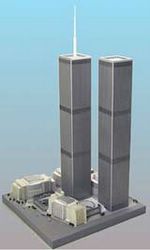 Since we're talking about Star Wars, I caught this random piece in the NY Times called Latest 'Star Wars' Movie Is Quickly Politicized. Sometimes a movie is just a movie.

Donald Trump wants to rebuild the Twin Towers and rejects the Freedom Tower idea. Wow, I actually agree on something with Trump. Let's rebuild the fuckers. Of course that will make them a target once again, but so be it. I can't think of a finer tribute to people who died there than to rebuild the old towers on the exact spot.

File this one under: Only in Minnesota. Drunk Man Steals Krispy Kreme Truck is a hilarious story. Al Cant Hang is unavailable for comment.

Snatch Smuggling Ecstasy Mule was busted at the Canadian border. No wonder my last hit of E tasted like chicken and smelled like tuna.

Speaking on drug busts, did you know that drug busts means big bucks for small town America? Word to the wise... if you are driving with several pounds of dope in your car, make sure you don't speed or have working tail lights.

Outrage and Silence is sobering read from Thomas Friedman who thinks it takes help from the Sunni Arab village to stop a wave of suicide bombings happening in Iraq.

ESPN Writer Busted for DUI is a funny tale about a drunk who try to run away from police and was tasered in the process. Damn drunk sports writers!

12 Year Old Sits on 12 Pack of Bud Light to Drive Car has got to boost Bud Light sales nationwide, especially among midgets and twelve year olds.

By the way, don't piss off grandma. Another sex prank gone wrong Down Under. Be careful who you call up for a quickie.

One of my favorite college basketball players, Rex Chapman, spills the beans on the anti-interracial dating stance by Kentucky officials. Wow. This is a shocker. There's racism in a Red State? My boy Rex Chapman and some serious ups.
by Pauly at 5/19/2005 02:18:00 AM